“According to the new UN report, major changes are needed in our food, agriculture and trade systems, with a shift toward local small-scale farmers and food systems recommended.

Even as the United States government continues to push for the use of more chemically-intensive and corporate-dominated farming methods such as GMOs and monoculture-based crops, the United Nations is once against sounding the alarm about the urgent need to return to (and develop) a more sustainable, natural and organic system.That was the key point of a new publication from the UN Commission on Trade and Development (UNCTAD) titled“Trade and Environment Review 2013: Wake Up Before It’s Too Late,” which included contributions from more than 60 experts around the world.”

John Lor, Tou SaiKo and Kia Xiong lead a great discussion with several members of the young Hmong community in Frogtown.  There was a general consensus that gardening was something that they grew up with, and continue to be a foundation of their parents’ generation, but hasn’t been as prominent in their contemporary lives.  There were several young parents in attendance, they were excited to have a new green agricultural resource in Frogtown to teach their children about the farming tradition in Hmong culture.

Frogtown residents listen as John Lor explains why he got involved and how the project is important to his Hmong heritage and raising his children in St. Paul. 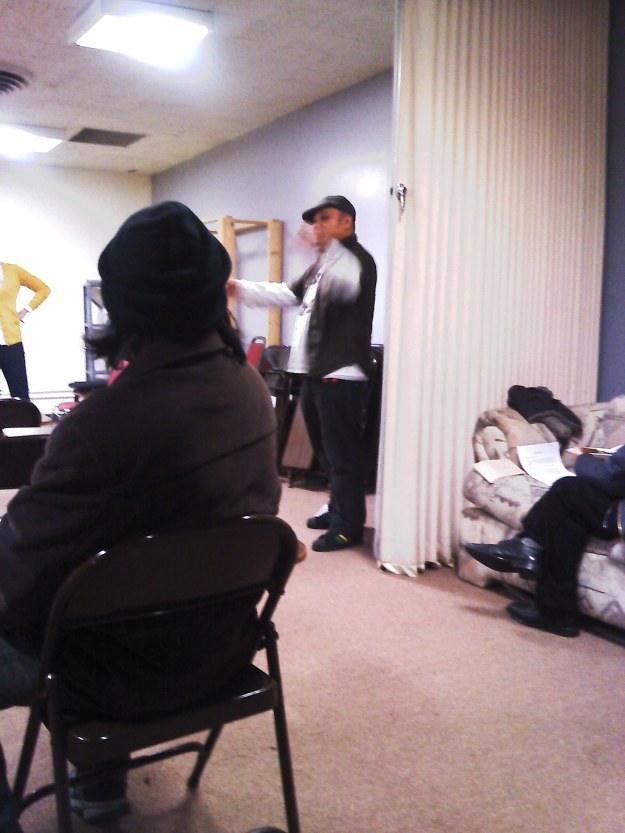 Tou SaiKo also advocates for the project, he is interested in the youth connection to the land and using the farm as an organizing tool for Frogtown. 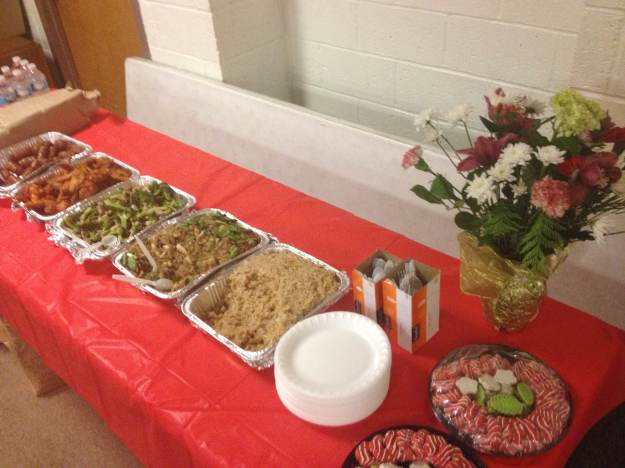 John Lor ordered quite a spread.  A wise man once said,  ‘There’s no meetin’ without eatin’.

Team members John Dwyer and Blaine Merker met with representatives from the City of Saint Paul City Manager’s office, Parks & Rec, and architect Paul Ormseth to discuss the possibility of re-using a historic barn at the Farm. While relocating a historic structure poses significant cost, historic and logistical challenges, there may be a possibility to re-use some of the structural members of a barn that might be in the path of development. We will explore including this option in the Master Plan.

What do you think about the possibility of re-using old barn parts? What about re-locating an entire barn?

We’re looking forward to seeing you at Jackson Elementary on January 4th to celebrate the accomplishments of the last few months of design and community engagement. Mark your calendars!

One of the most important concepts presented by the design team is the notion that not all of the Farm can be built in a single year — both because of limits on available funding and the need to build soil and site fertility over time.

Above, this idea is illustrated with a simple diagram showing how various parts of the Farm could be built out over the course of four years. What would come first? It makes sense to invest in infrastructure in one effort, if possible. Things like pathway paving, lighting, fences, and play equipment would all make sense to go in in Year 1 when construction is active on the site. After this framework is complete, other parts of the Farm could be constructed as time, money and man- and woman-power allow: fruit trees can be planted, soil built up, gardens built.

One exception to the rule of “infrastructure first” might be the construction of a community gathering building, or Farm House, which might require additional funds to be secured.

Stay tuned for our meeting on January 4, 2014, where the design team will break out what can be funded and built in Year 1 vs. subsequent years.

This week the Frogtown Farm design team presented three site plan and programming options at an evening meeting at Jackson Elementary in Frogtown. Many attendees were familiar with the night’s facilitor — actor and singer T Mychael Rambo — who led the meeting with song and call-and-response. (Thanks to the Trust for Public Land for supporting the meeting with his services!) This was the first official combined meeting of the Farm design team and the City of Saint Paul Parks & Rec Department, and the plans for the park-and-farm were presented together, as the unified whole that we hope to make them. 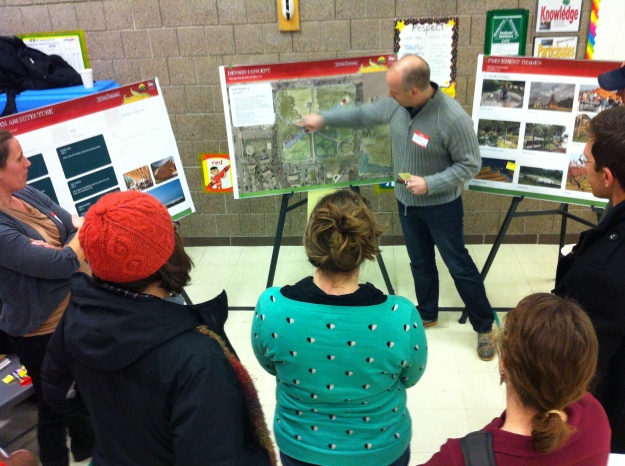 Despite bitter cold and snow piling up outside, several dozen people attended the meeting and dove into an enthusiastic discussion of the plans. Each option contained elements that have received support in previous presentations and with the Farm’s Design Advisory Committee (DAC), so the exercise of the evening involved creative analysis of the possible combinations that could be made from the various plans.

…and asked attendees to consider which of the three would provide the best economic and organizational roadmap for the Farm. (See the ‘Meeting Record‘ tab for detailed descriptions of each programming option.) Unlike the farm site designs, the programming options were presented as options that should be pursued whole — as opposed to mix-and-match. Why? Because a clear and coherent programming strategy will be crucial to moving the Farm forward in the first few years.

We stop for a snack break before splitting up into 5 stations to talk about the site options, programming, and phasing.

The design team got lots of great feedback, which we will be digesting in the coming days to arrive at a single site plan and program strategy. You can view the “raw” comments on the meetings page here, along with the actual boards and people’s written notes. If you weren’t able to attend the meeting, we hope you’ll catch up and see what people wrote.

What’s the next step? The team will be preparing the final site design and presenting it at our January 4th celebration, 1-4pm, once again at Jackson Elementary. We hope to see you there!

The team’s crackerjack soil ecologist, Jake Voit, breaks down the nuances of loam! 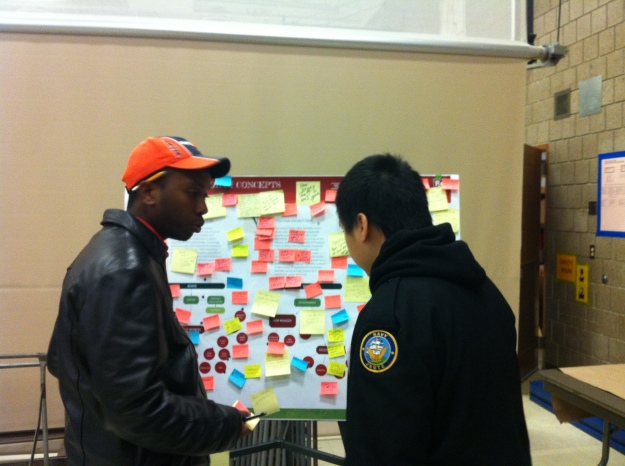 Writing comments on ‘Option B’

Chris Edwards, a neighbor and proud urban chicken owner, held a small meeting to bring her neighbors together to talk about the project.  Using a game board of the park site and set of game pieces  by Rebar,  residents were able to design their fantasy farm! 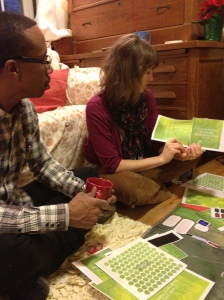 Kia Xiong a local youth offers of her engagement work: “During the last few weeks I talked to many Hmong families.  some really like the ideas of a farm in Frogtown.  They are very excited about it.  I am very happy to help spread the word of Frogtown Farm”

Kia, a seasoned participant in local youth leadership organization, Youth Farm, has been helping to connect outreach efforts to youth and Hmong communities in the neighborhood.

Here is a sketch Kia contributed- a Frogtown Frog enthusiastic about Frogtown Park and Farm!

See you there! There is community meeting this upcoming week.  Rebar has synthesized all of the amazing community feedback we’ve received so far into three potential designs.  Come check them out and help us tailor them into the final proposal.

We’ve been busy flyering throughout the neighborhood to spread the word. Here’s us at the Rondo Library!

Have you ever considered the difficulty of balancing so many competing needs in the process of making a community farm?

An ambitious project like Frogtown Farm has to accomplish three things, each a task in itself.

Our work at Rebar exists somewhere in between the first and second steps. We are trying to help the Frogtown Farm board, the community members taking part in the Design Advisory Committee, as well as the many many other folks invested in the design process (like you!), to refine the vision for what the farm might do, and what it wants to accomplish in doing so. That’s why so much of our October 12th Design Workshop focused on the concept of ‘yields’ (that is, what we want to see come out of the farm—besides the obvious: food!).

The more challenging part than just creating a vision is matching that vision to the reality on the ground: the budget raised, the people involved, the existing legal and political parameters, and importantly, the community’s desires (which keep in mind are often inconsistent or incompatible!).

Some people may want more green space, while others claim the right to use a car to get to the farm, which will require parking on site (and thus consume what could be green space). Some neighbors might want a farm stand, but perhaps there isn’t enough money in the budget to staff it? We heard many calls for a neighborhood gathering/event space, but we have to figure out how to create such a space over time, as there isn’t enough money to build a large building right away (buildings are more expensive than farm fields!).

Designing this complex project, with so much potential and so much passion revolving around it, takes the work not just of designers, but of community members themselves. Board members, the DAC, and individuals all need to consider the options beyond their own initial desires. Recognizing that not all Frogtowners think or are alike, and that diverse needs need to be met in diverse ways, every person who has a stake in the farm has to occasionally step outside themselves to see how someone else might be thinking or feeling about the farm.

This isn’t to say that it’s inappropriate to ask for certain design elements, or push for certain program outcomes. It’s just to say that, at a certain point, the farm can only do what the farm can realistically do, and that requires the community to prioritize certain yields. We hope that we are providing options to do this, to tease out what works best for this community, and to hold a space for the recognition that there is always room to readjust the plan and the program in the future, should it not be satisfying the balance of needs in the community.

One of our next blog posts will be about this process: ideas our team has for how to set up the Farm’s programs in such a way that we can revisit, revise, and reconstruct the farm to be better and better over time.